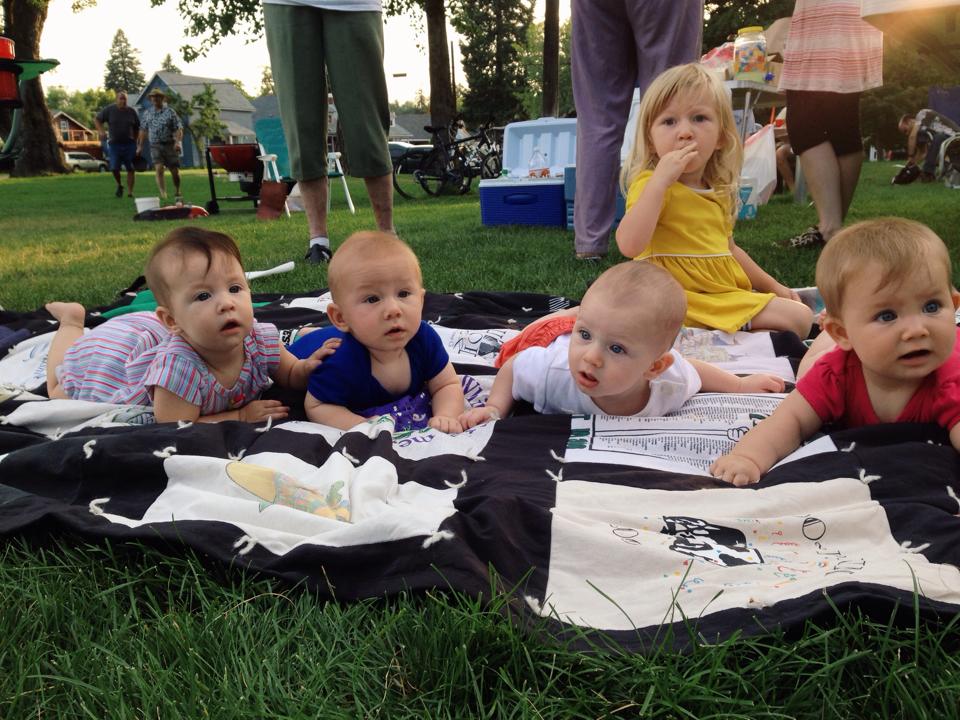 What follows is a condensed version of the minutes from the short meeting of the Emerson-Garfield Neighborhood Council that followed the annual Summer Potluck on August 13, 2014 in Emerson Park.

Prior to the meeting, during the barbeque, some neighbors brainstormed with Joe Cannon, a restoration ecologist from the Lands Council, about what trees would be ideal to plant throughout the neighborhood as part of the current Greening Neighborhoods grants.

The meeting was called to order at 7:05 pm, and a quorum of 18 voting members was present, along with 10 guests. The June minutes were approved without any changes.  There were no additions or changes to the agenda, and there were no guest speakers.

The Greening Neighborhood grants were discussed first. There are three projects in the works, each of which is a volunteer project. These projects include the east side of Mansfield near Washington, Cora east of Monroe, and a continuation of the previous planting project on N. Maple.

A draft of the memorandum of understanding (MoU) between Project Hope Spokane and the Emerson-Garfield Neighborhood Council was presented in order to identify the roles and responsibilities of each party regarding the Emerson-Garfield Farmers’ Market. It was requested that the EGNC arrive with feedback and be prepared to vote on the MoU at the next meeting. The market saw $3,200 in total sales on Friday, August 8, and there is now a permanent street sign on Monroe.

Safe Routes to School is looking for interviewers for Garfield and Audubon Elementary who will help determine priorities for things like sidewalks and crosswalks. There is an interview outline you can follow — but keep in mind that the deadline for interviews is the end of August. Get in touch if you’re interested.

The traffic circles on Montgomery/Madison and Montgomery/Cedar are out to bid, and they will be installed by the end of autumn. The funding is done with Photo Red dollars, not tax dollars. Emerson-Garfield will also get sidewalks on Adams and Madison, filling in gaps.

For Corbin Senior Activity Center, there is still no arrival date for the van that they ordered in the spring, and they are hoping for September. The center’s biggest fundraiser, the annual auction, will be held there on Saturday, September 27. This year it’s called “Athenian Nights.” They would appreciate donations and attendance, as the fundraiser helps keep their doors open. So please donate!

Also, a mere $24 will get anyone over the age of 18 an annual membership to the Corbin Senior Activity Center. Membership entitles you to use of their facilities (like the Wii) and discounts to businesses all along N. Monroe.

The CSAC also installed cameras throughout the building in order to improve safety and discourage vandalism. The money for the cameras came from a donation by a former board member. There is still a separate cost for the installation.

Megan Kennedy led a toast (of sparkling cider) in celebration of the Neighborhood Plan, which is now complete. The City Council unanimously adopted the plan by resolution on July 28.

Eline Helm reported on Concerts in the Park. The feedback has been very positive; Sarah Brown and her husband clearly did a wonderful job. There were approximately 100 people in attendance, and $55 in donations was gathered in the collection during the event. Donors from the previous year gave larger amounts this year.