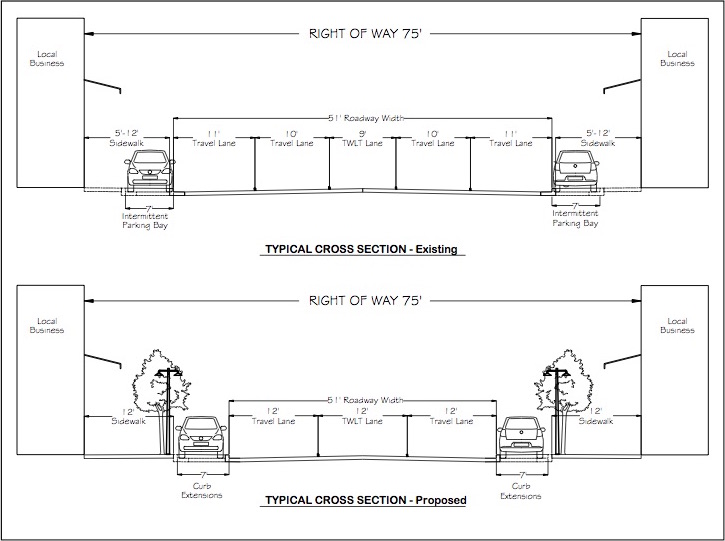 The state of North Monroe has been a point of concern for residents and businesses for a long time now. This poorly lit, five-lane, treeless thoroughfare physically and psychologically divides Emerson-Garfield Neighborhood. There have been pedestrian fatalities. The doors of parked cars have been ripped off by passing traffic. The current environment is downright hostile to anyone who wants to park and walk from shop to shop, and by the same token, it poses an additional challenge to all the businesses that lack dedicated parking. The number of vacant and decrepit buildings is a good indication of that.

Even this past November, when the Emerson-Garfield Neighborhood Council was actively seeking to fund the installation an STA bus shelter so the growing ridership of the #24 didn’t have to stand in the rain, we could only identify one location with sufficient sidewalk in the stretch between Indiana and Grace.

For all these reasons, North Monroe featured heavily in the EGNC’s Neighborhood Action Plan, which had the support of residents, businesses and even the full City Council. And it’s been an ongoing focus of many parties outside of the neighborhood council — including the North Monroe Business Association, the West Quadrant Tax Increment Financing District (WQ TIF), several members of the City Council, the STA, and the City of Spokane.

Because the funding necessary to comprehensively overhaul North Monroe was so great, most everyone thought that the timeframe for this kind of project was about seven or ten years away. But that’s changed.

This past summer, engineers from the City applied for two ambitious grants with the goal of improving North Monroe. At the start of the year they got word that those applications were either successful or highly ranked for approval.

The first comes from the Washington State Department of Transportation (WSDoT). It has awarded the City $3,773,200 through the federal Highway Safety Improvement Program, which, according to this overview, is to:

The second grant is through the WSDoT’s Pedestrian and Bicycle Safety Program (this document has more info). The state legislature still needs to formally adopt and fund the list in their 2015 session, but this project ranks high on the shortlist. The remaining $326,800 of the anticipated $4.1 total to revitalize North Monroe would come from this program.

Incidentally, this funding comes in addition to the  $150,000 that the WQ TIF has allocated as “seed money” to attract large-scale grants for this stretch of North Monroe.

The project scope includes reducing North Monroe from five lanes to three — a “road diet” in urban planning lingo — from just north of Indiana to approximately Kiernan at the top of the North Hill. The existing parking insets will be filled in to make a consistent 12′-wide sidewalk with trees and/or planted swales in some places. Curb extensions will be added at all intersections. The existing outside travel lane will be turned into on-street parking. The traffic signal at Montgomery — the intersection where the Institute for Extended Learning and Caffe Delicio draw considerable pedestrian traffic — will be modified to make it a safer pedestrian crossing. Other marked crosswalks in the corridor will be enhanced with center refuge islands.

Pedestrian lighting is included to some extent. In line with their recently adopted Moving Forward initiative, the STA also intends to incorporate bus stop and other high-performance transit improvements into the project.

There are many modeling and case studies (see here, for example, or here, or here) that show these improvements will not only make North Monroe safer and more attractive to pedestrians, they will also improve traffic flow while increasing business visibility. That might seem counterintuitive, but the proof can even be seen locally in areas like East Sprague, South Perry and Market Street in Hillyard. More lanes does not necessarily equal better traffic flow and better business.

As for the timeline: This is no longer a seven- or ten-year pipe dream. Planning will likely take place throughout 2016, and the conditions of the funding stipulate that the construction contract must be out to ad by September 2017. This means construction will take place in 2018 — just three years from now. On the scale of construction projects, that’s just around the corner.

In due course the EGNC will be working with these City engineers, the City Council, the STA, the North Monroe Business Association and other organizations to ensure that the redevelopment of North Monroe takes place in a way that aligns with everyone’s priorities.

2 thoughts on “The Future of North Monroe”