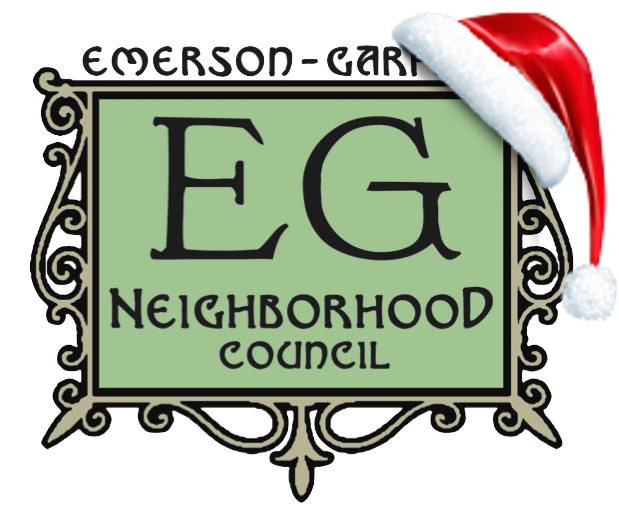 The December 10, 2014 meeting of the Emerson-Garfield Neighborhood Council began after its Holiday Potluck. Three new voting members and 14 guests were in attendance, as were three firefighters from Spokane Station No. 2.

Despite scheduling a spot on the agenda, no one from Spokane Public Schools was present to speak about the proposed bond and levy that will be on the 2015 ballot.

Two representatives from a new charter school, PRIDE Prep, spoke about their mission and enrollment process. They are located in the old Social Security Administration building at 811 E Sprague and will be opening in the fall of 2015. Their curriculum is hands-on and makes ample use of technology. There will be a maximum of 120 students for the upcoming school year; the enrollment deadline is Wednesday, February 25, and they are already 80% enrolled.

The vote was 14-2 (with several abstentions) in favor of foregoing the January meeting. This means the next E-G Neighborhood Council meeting will be on Wednesday, February 11.

Alicia Powell informed the council that the City would like to plant edible fruit and nut trees on the neighborhood’s newly annexed land near the TJ Meenach Bridge. The Water Dept. will install irrigation and the public will be allowed to glean. The EGNC will work with the City over the next few months to arrange a spring planting.

Following the EGNC’s funding allocations in November, the status of Community Development Block Grant applications was discussed. Timothy Diko and Sara Kimball were applauded for their involvement with filling out the CDBG applications. Monroe, on Dalton, will receive a new bus shelter. Fulcrum Institute and the West Central Community Center have both verbally thanked the EGNC for its support in the upcoming year.

The two new traffic circles on Montgomery were discussed briefly. They are having their intended effect of slowing speeding cars; however, some careless or uninformed drivers have been seen simply riding over them or not making the proper left turn and instead cutting the “round” out of the roundabout. The roundabouts themselves will be more noticeable by next spring once vegetation has been planted.

Laura Schlangen reported on the Corbin Senior Activity Center. Corbin’s membership has increased to 1188 members Deeper Walk Ministries is offering church services at the Center on Sundays at 10am.

Karl Bolt reported that seven tons of garbage was collected in 2014 because of the dump passes we distribute at the Emerson-Garfield Farmers’ Market. This past year record total of $6,964.95 was spent on cleanup efforts of more than 41 tons of waste. The next roll-off event — aka Spring Cleanup — will be on Saturday, April 18.

This past season saw $41,458.28 in total sales at the Emerson-Garfield Farmers’ Market.  About one-third of the vendors have direct ties to Emerson-Garfield, so the sales generate some neighborhood return. A total of $1,951 was spent using SNAP (EBT) funds. Every $5 spent at the market using an EBT card exchanges for $7 in market tokens (the supplement is called Fresh Bucks), with the $2 difference being reimbursed by Catholic Charities; more than $700 in Fresh Bucks was issued this season to eligible patrons.

In addition to the support from Catholic Charities, the market also arranged collaborations with Project Hope; Knox Presbyterian, which supplied the location; Spokane Hope Christian Reformed Church, which shares the building with Knox and sells Korean food from inside the church; and Audubon and Garfield Elementary Schools. The farmers’ market also recently won a marketing award from Community Assembly.

Candace Mumm reported on issues that Spokane City Council has been debating. Among other things, the Salvation Army warming shelter is the only shelter funded this year, and therefore they have requested that bus passes to the shelter be included in the budget.

Paul Kimball gave credit to the firefighters who attended for part of the meeting, and discussed some of the developments at the Fire Department.