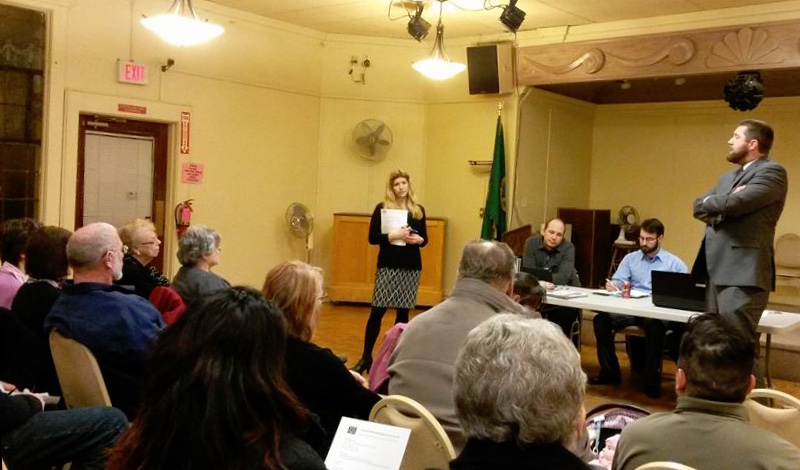 This is a brief recap of the Emerson-Garfield Neighborhood Council (EGNC) meeting that took place on February 10, 2016.

Patrick also noted that code violation complaints can be submitted through a C.O.P.S. Shop, so all of the documentation can be recorded with the Shop as the source to keep you anonymous. If you do file directly with Code Enforcement, you may check a box on the form to remain anonymous if you feel threatened.

Kathy Armstrong of the Spokane Police Department reported on the Department of Justice Reform Recommendations, with forums bridging the gap between law enforcement and the community. The DOJ works together with the reform committee. Officers go through Crisis Intervention Training (CIT) to handle individuals with mental health issues. In addition to 40 hours of CIT, officers have also gone through training with Spokane Mental Health. There is additional training planned with World Relief to educate officers on the cultures of those who are immigrating into Spokane.

Jonathan Mallahan of the City of Spokane’s Division of Neighborhood and Business Services (currently called the Office of Neighborhood Services) reported on the upcoming organizational changes at the City. He stated that there will be no reduction in the workforce during the reorganization of departments, which is scheduled to take place on March 1, and that many of the current departmental duties will be brought into closer alignment. Many of the questions that were brought up following Jonathan’s presentation were related to Parking Services, so an additional speaker will be invited to a future neighborhood council meeting to address that topic.

A call went out for volunteers at the Emerson-Garfield Farmers’ Market for the 2016 season. Several members stepped forward to assist and share responsibilities.

The new Neighborhood Notification Ordinance, which currently notifies the EGNC chair and vice chair of the applications for construction projects, was discussed along with recent training sessions on the issue. Neighborhood Notification is intended to keep residents apprised of what is happening in terms of neighborhood development and will give them some voice in the process. Anyone will be able to sign up for permit and land use alerts within a certain distance from their property.

Traffic-calming requests are due by the March 9 EGNC meeting and will be put forward for approval at that time.

Laura Schlangen reported on the Corbin Senior Activity Center. Beth Daniels is the new administrative manager and will be responsible for tours. The Movin’ and Groovin’ Fair will be on March 5. The Parks Department has decided not to give financial support to the center’s elevator project.

Jay Cousins reported on the recent Community Assembly meeting. The main issue was a prolonged discussion regarding the ongoing funding of citywide sidewalk projects. Because so many decisions are pending, there will be no sidewalk projects in 2016.

The Land Use Committee, which Barb Biles attended, discussed the impact of high-volume housing at Indian Trail, but there were no issues discussed that would impact Emerson-Garfield.

Jonathan Martinez reported on the Rental Housing Stakeholders Group. Concerns regarding landlord-tenant issues will be presented at the YMCA corporate building on Boone and Monroe on February 23 at 3:30pm.

The West Quadrant Tax Increment Financing Committee (WQTIF), represented by Megan Kennedy, did not have a quorum for the past two meetings. The main focus in our neighborhood with the committee is North Monroe. An additional position on the committee is open, so please consider serving.

Carlie Hoffman reported on topics discussed at the recent meeting of the citywide Pedestrian, Traffic and Transportation (PeTT) Committee. The Washington State Department of Transportation may provide counters to measure bikes and pedestrians if the City can find funds for installation and maintenance. The City is also currently working on updating the Transportation chapter of the Comprehensive Plan.