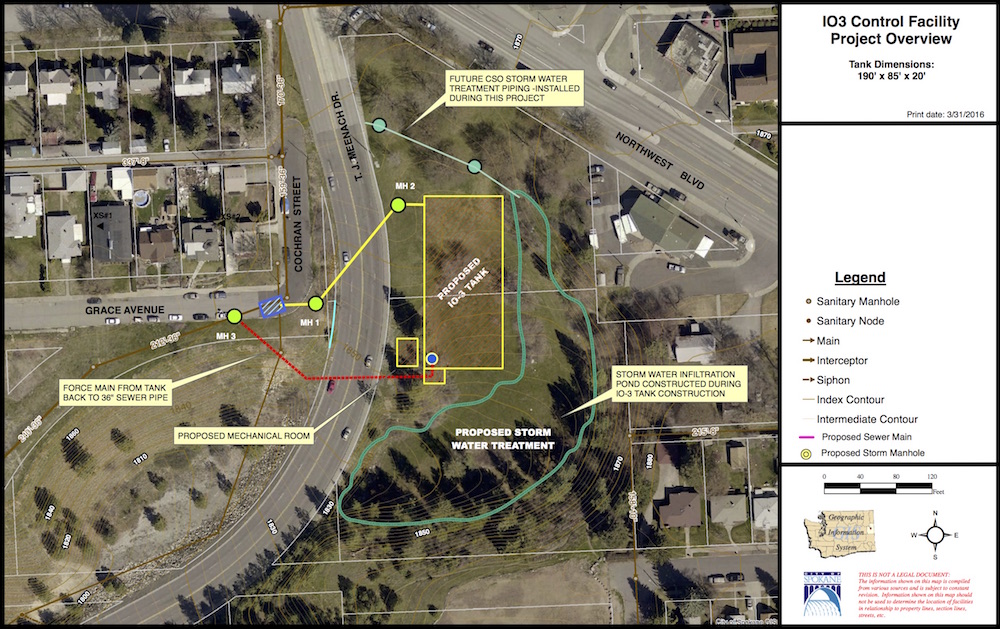 This is a brief recap of the Emerson-Garfield Neighborhood Council (EGNC) meeting that took place on April 13, 2016.

Cindy Kinzer and Kyle Twohig from the City of Spokane spoke about the new sewer and combined stormwater overflow (CSO) tank location east of TJ Meenach Drive and north of Pettet Drive known as CSO I-03. Spokane is comprehensively updating its wastewater system in order to have less sewer waste in the rivers due to overflow. The Environmental Protection Agency would fine Spokane if these updates are not made. This project is in addition to CSO Basin 12 to the south (here is a map of the two).

Construction of the tank in our neighborhood will take roughly one year from beginning to end. Questions and concerns can be directed to Cindy at ckinzer@spokanecity.org or (509) 625-6397. See images below for more detail.

Representatives from the Spokane Public Library reported on the Future Study. The library is looking at changing the functionality of its facilities to meet our community needs over the next 20 years. Some buildings are in disrepair and outdated, and sustainability consultants have recommended improved technology, the addition of collaborative spaces, more engaging children’s areas, comfortable seating, group study rooms and branch expansions at Shadle and South Hill. The 2017 levy for libraries will cover existing operational costs. An additional bond will be needed for all further improvements that are needed to revitalize the library buildings.

Input on the Future Study is welcome at the upcoming community conversation at the Downtown Branch (906 W Main Ave) at 11am on Friday, May 6 or via e-mails to ideas@spokanelibrary.org.

Brianna Musser volunteered to take the reins of Concerts in the Park this year. To help fund this event, the neighborhood will submit a Neighborhood Budget application for a maximum of $500. Melody Dunn, who is working on this process on behalf of the Community Assembly, volunteered to assist with Emerson-Garfield’s application.

Executive elections were held to fill the positions of chair, vice chair, secretary, Community Assembly representative (including alternate) and Community Development representative. Tim Musser and Carlie Hoffman were elected as co-chairs of the EGNC. The vice chair position went to Karl Boldt, who will be supported by Tom Powell. The secretary position was divided into minutes (Stan Burke) and membership (Bryce Morrison). Jay Cousins was re-elected to serve as the Community Assembly rep; Tom Powell will serve as his alternate. Donna Emmingham will represent Community Development.

The Office of Neighborhood Services is holding Cleaning from the Corridor on Saturday, April 23. Volunteers from Emerson-Garfield are encouraged to participate in a show of neighborhood solidarity.

The start of North Monroe revitalization was recently an agenda item at a Public Works meeting. Groundbreaking will not take place until 2018, but planning is beginning now. A city-level stakeholder group is being organized. Business owners, residents and other officials will represent various groups. Interested members will soon be able to apply to be on this committee.

The Silver Auctions parking lot was deemed unsuitable for the Emerson-Garfield Farmers’ Market. The Adult Education Center (2310 N Monroe) has instead graciously offered the market use of its lot. The market will be leaving its former location at Knox Presbyterian and moving there for the 2016 season.

Karl Boldt gave an update on the 8th annual Spring Cleanup, which is scheduled for Saturday, May 21 from 9:30am to 12pm at Faith Bible Church (600 W Cora). As usual, a postcard with all the necessary information will be mailed to all Emerson-Garfield residents a few weeks prior to the event.

Jay Cousins reported on the Community Assembly. There is a new Police Ombudsman for the City. The CA’s Budget Committee is allocating money to send a representative to a NUSA conference in May. The City is also looking at a new measure to help take care of sidewalks. CA training meetings are available for anyone interested in learning about the Community Assembly; the training for our district is on Wednesday, April 27 at 5:30pm in the West Central Community Center (1603 N Belt).

Barb Biles reported from the Land Use Committee on changes taking place within the committee itself. Barb is the new facilitator.

Carlie Hoffman reported on the Pedestrian Traffic and Transportation (PeTT) Committee, including their discussion of funding for sidewalk repairs within the city. One proposal was that the City take increased responsibility for the sidewalks as is common practice east of the Mississippi.

The neighborhood’s position on the Long-Term Rental Stakeholder Group remains open, and there is a particular need for renters to be represented. Anyone interested in representing Emerson-Garfield and renters should get in touch with the EGNC at info@emersongarfield.org.

Paul Kimball spoke about the Emerson Community Garden. The future of the garden is uncertain, with the water supply being dependent upon two adjacent properties that are going to be for sale, but it will still be possible to use the garden this season. Anyone interested in farming/gardening the lot this season is encouraged to contact the Kimballs.

A representative from Parking Services is scheduled to speaking at the May EGNC meeting, as will a member of the Spokane Edible Tree Project.